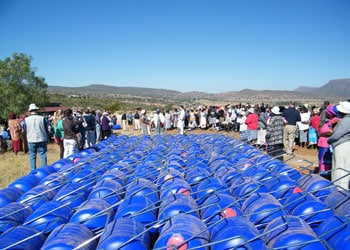 Hippo Roller is out to reach 1% of those needing potable water. Could we help them do more?

The Hippo Water Roller looks like a wheelbarrow, but is actually a revolutionary new way to improve the lives of millions who have trouble accessing clean drinking water.

In the video below, you can see how simple the design is and might be thinking “Why hasn’t someone done this before?”

Well, people probably have done quite similar designs. And the Hippo Roller has been around for 25 years.

What constantly amazes me about problems like clean drinking water, famine, even war and violence is how often people involved can’t see what looks obvious from the outside. I am reminded of how I miss the obvious or find things I don’t too, and how the answer to many of the world’s largest problems is to get a simple idea shared with everyone involved.

The Hippo Water Roller is a successful product and yet so few know about it. I think we can do something about that.

Life Before the Hippo Water Roller

I used to be a die hard “get a job” self-reliant, short sighted ignoramus. I had learned that taking responsibility for my life, taking advantage of what I could and working hard would bring me success and happiness. I never went for anything unethical, but I knew that my compassion was taking a back seat to getting things done.

I was so wrong.

Once I had a family, matured a bit and really looked at what’s important, I knew it wasn’t money or things. Helping someone who could not help themselves became my bliss. Serving everyone I could became my mission. Teaching simple truths wherever I can.

This changed the way I look at everything and made life a lot more fun in the process.

So when I heard a story about girls the age of my daughters, carrying water for hours every day, a picture of my girls with their backpacks of school textbooks morphed into bright intelligence young woman like my daughters wasting their lives (Someone soon pointed out that carrying water is service and I’ve stopped using the word “wasting”). 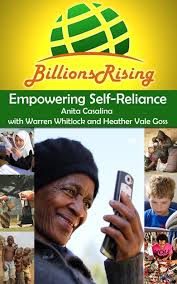 Billions Rising: Empowering Self-Reliance. How millions are giving a hand up rather than a handout

I became obsessed by the calculation of how much human potential could be unleashed by easing that burden.

I’ve since helped write Billions Rising: Empowering Self-Reliance with Anita Casalina and Heather Vale. We researched positive programs that give a hand up rather than a hand out and found that most people in the 2.7 billion living on under $2.00 per day are not asking for handouts. They want to be self-reliant.

Some critically need food and water for today. Most spend their days working to get the basics for others. When they learn a better way, they embrace it and take responsibility,  then share what they know with others.

Turns out. Sharing and caring brings happiness in any economic situation. Pride in being self-reliance grows to leadership and better lives everywhere.

What the Hippo Water Roller Teach Us

The Hippo Water Roller is a great example of the principles we shared in Billions Rising.

Beyond the many thousands we reached with the Billions Rising book and radio show (and now more through the Billions Rising Foundation), I’ve continued to hit the share button on hundreds of videos, posts, tweets and people and shared posts like this as often as possible.

I’m writing this after click one button a few days ago to re-share this video. Over 150 people had commented or tagged that post and it stood out as popular. So I went to YouTube, saw that 359,082 people had viewed the video (other videos of the Hippo Water Roller have millions of views).

That’s pretty good, but I think we can do more.

Helping each other, we’ll help the Hippo Water Roller and make the world a better place. It’s the least I can do for my daughters and girls like them.